Floaters and the Final Straw – Deciding to Seek Therapy

Most of the time, my health anxiety was related to aches and pains in my body.  If my body  happened to be ache or pain-free for an extended period, my anxiety levels were relatively low.  And then came the floaters.

Oh my God. I’m Going Blind. Or Having a Stroke

In July 2016, I was walking back from the cafeteria in my work building one afternoon.  It seemed like the floors in our building were extra shiny that day, like maybe they had recently been buffed.  I thought I had caught an unusual glare in my eye, because I was seeing a type of flashing in my eye.

This was prior to starting therapy, so my anxiety levels already started to skyrocket. I immediately started to think that the glare had caused permanent damage to my vision.

I got on the elevator in my building to head back up to my office, and closed my eyes while I was in the elevator, thinking that it would make the flashing go away.

When I got to my floor, I reopened my eyes, and now I was seeing something even scarier.  I was completely panicking.

I remember thinking to myself, “Wow, this is finally it.  I’m finally having that stroke I’ve always feared.”

I was seeing what looked like icy lightning bolts in my vision. They were taking up my entire field of vision.

I couldn’t breathe.  I dropped the plasticware I had been carrying with the lunch I had purchased in the cafeteria.  There was someone else walking in the hallway, and to maintain an appearance of normalcy, I bent down to pick it up.  I almost fell over because I was close to hyperventilating. It took me several seconds to form a grip to pick up the plasticware because I was panicking so much and losing my balance while I was bent down.

I set down my lunch in my office and debated whether I should call 911.  Instead, I took my cell phone with me and went to the restroom.  I thought maybe I just had some strange eyelash or fuzzball in my eye.  I spent several minutes inspecting my eyes.  I washed cold water on my face with my eyes open, trying to wash out any debris.  I cleaned my glasses, thinking maybe it was some unusual smudge on my lenses.  I closed my eyes one at a time, but I was seeing the icy lightning bolts out of both eyes.

I decided not to go to the ER. Instead, I started calling local ophthalmologist offices.  Luckily I found one that was able to fit me in for an appointment in about 45 minutes.

This image is the closest thing I can find to what I was seeing in my vision: 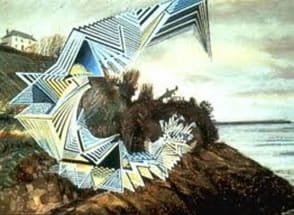 It’s just an ocular migraine. But, you’re high risk for a detached retina.

After lots of tests at the ophthalmologist office, I was diagnosed with a totally benign condition called an ocular migraine. It apparently is like the visual “aura” that migraine headache sufferers experience prior to their migraine, but without the actual headache.

He replied, “Oh, no, a detached retina is not always precipitated by a head injury.  In fact, someone like you, who requires a strong eyeglass prescription, is especially susceptible to a detached retina. Folks like you with poor vision should have a retinal exam once per year just to make sure your retina isn’t showing signs of weakening.”

“Oh,” I said.  “Another thing to worry about in life I suppose,” I said in attempt in a joking-like voice. But really, I wasn’t joking. It was another burden of health-related things to worry about. It was like I could feel the weight put on my chest and my mind cloud up even more with distractions.

Do not Google Detached Retinas

When I got home that evening, and after my dilation drops wore off and I was able to look at my computer screen, I started to Google everything I could about detached retinas.  And with each detail I read, it sounded awful.  A possibility of permanent damage to your vision. Potential for surgery on your eyeballs while you’re awake. Following certain types of the surgeries, not being allowed to move your head for at least two weeks.  I mean, how is that even possible not to move your head for two weeks?

And I’m susceptible to this??  Oh my god. How awful.

I mentioned at the beginning of this post that my anxiety and hypochondria was mostly linked to aches or pains in my body.  If I was relatively ache-free for a while, I was also generally free of anxiety and worry.

However, this new worry, about being constantly aware of the potential for a problem with my vision, brought my hypochondria to an entirely new level, and what was finally spurred me to seek therapy.

Some of the main symptoms for detached retinas, according to “Dr. Google” is floaters and flashes of light. I now became obsessed, OBSESSED, with looking in my field of vision for floaters and flashes of light.  No more were my hypochondriac thoughts limited to times when I’d feel an ache or a twinge.  I was now actively searching for symptoms with my eyes.  In fact, my eyes started to hurt because I was changing my focus so much, causing even more anxiety.  Instead of looking for things around me, I was focusing on any little floater in my eye. I think that by changing my visual focus so much, I was actually causing eye strain and pain.

I become obsessed with detached retinas. I searched YouTube for videos of the surgery, trying to imagine how I would tolerate it.

Another one of the things I learned about detached retinas during my obsession?  That time is of the essence.  That when you start to experience symptoms, you need to seek immediate medical attention to minimize the risk of permanently damaging your vision.  That, as long as you can get the detached retina repaired quickly, that you’re much less likely to experience long term damage.

When I realized my hypochondria was truly interfering with my life

At the time of my ocular migraine and newly discovered fear of detached retinas, my husband and I had been talking about planning a trip to Japan. We both love to travel, and usually take about 2-3 major trips each year. It’s our hobby, and we treasure our vacation time. I have traveled since childhood.

But, with this new “risk” of a detached retina, I was second guessing everything about traveling, especially on a long flight to Japan.

“What if my retina started to detach while over the Pacific Ocean?  I wouldn’t be able to seek medical attention nearly quickly enough. It would be guaranteed that I would lose part of my vision. And would they have to do the retinal surgery there in Japan?  How long would I have to stay there while I healed?  Some of the articles I read said that you couldn’t fly for weeks or months after surgery for a detached retina. I’d be stuck there with this dreadful medical problem, away from the comforts of my own home.”

This realization, that I was willing to alter my most treasured hobby of traveling, was my last straw for suffering from hypochondria.

I was ready to kick these worries to the curb, and I finally made the decision to seek therapy.

Within two weeks, I had an appointment scheduled. I was ready to get well.

OCD Health Anxiety – A Diagnosis for My Obsessive Worry about Health

Suffering from Hypochondria and Health Anxiety for Ten Years

Why am I a Hypochondriac? The Origin of...

Have I Always Been Obsessive about my Health?

Overcoming Hypochondria (Even if you think you’re Hopeless)

Suffering from Hypochondria and Health Anxiety for Ten...

[…] I had been trying to “treat” my hypochondria on my own, prior to seeking therapy, I had read in many different places that something called “Cognitive Behavioral Therapy” (CBT) […]

I am so relieved reading this. I am such a hypochondriac about my eyesight (and everything else in between) and reading this has made me feel like I’m not alone! Mine started when I was really hungover one day, staring at a white wall in bed, and suddenly I noticed all these floaters, googled it and then thought my retina’s were detaching. Since then I’m constantly looking for things wrong with my eyes, and this has caused me to have migraines with aura (which first happened to me at work too and I thought I was officially blind). I’ve also made the mistake of googling other eyesight related issues. I think the main problem with being a hypochondriac about eyesight, is the fact that you’re always using your eyes, and even a little reflection on my phone screen makes me think there’s something wrong with my eyes, and I end up quickly looking at a wall to make sure there’s not weird spots in my vision. I’ve been to two opticians and both said my eyes were fine and healthy, but I thought, how can they be healthy when there’s weird stuff happening to them all the time?! I was told I have a slight astigmatism in both eyes, which explains why light looks weird and fuzzy sometimes, but I’m forever convinced that there’s something seriously wrong. I’m really looking forward to reading the rest of your blog, it really makes me feel like I’m not alone, and hopefully it will help to reduce my anxiety of my health. Thank you for writing this!