In every other realm of my life, besides my health anxiety, I consider myself to be a relatively calm, rational person. So, I was never able to figure out why I was being so irrational and anxious about my health.

Telling myself that “it’s very rare for someone in their 30s to develop a blood clot,” or, “it would be extremely unlikely that your abdominal pain was a sign of colon cancer.” was never helpful.

But WHY weren’t they helpful? I mean, those are important, rational explanations.  Probably the same type of information I would convey to a friend who was worried about a particular symptom. You would think that it should easily explain away my fears.

But, those explanations did zilch to help ease my anxiety.  And, thanks to therapy, I now I understood that I should not expect rational explanations to be helpful.

Over the course of several therapy sessions, Dr. Lindo mentioned the “lizard brain,” also sometimes called the “reptilian brain.”  This is the type of brain that all animals (including humans!) have.  It controls our survival urges, including the “fight or flight” response.

For example, when we’re being chased by a bear, we don’t need our “thinking” brain interfering with our survival mode. We don’t want to debate with ourselves which way to run.  Dr. Lindo explained that it’s almost like a lid snaps down on the thinking brain.  The survival instincts from our lizard brain kick in and are cut off from our thinking brain so that we don’t overanalyze the situation.   Our brain wants us to survive.  Don’t think.  Live.

The Lizard Brain and Anxiety

However, in people with excessive anxiety or OCD, our lizard brains get activated way too much. In my case, a slight twinge of pain was enough to summon my lizard brain’s flight or fight mechanism.  And, with that, my thinking brain shuts down.  She explained that that is why rational explanations generally do not help someone who is in the midst of an anxiety attack or obsessing over an OCD-induced thought.  Our brain is in survival mode, not thinking mode.

It’s worth pointing out that my therapist explained that I had “trained my brain” to activate that fight or flight response.  That, obviously, I didn’t always have anxiety over minor bodily sensations.  But, as I did start to notice those sensations, I slowly but surely started panicking so much that that the fight or flight response was getting triggered every time. (She explained this “training the brain” concept during my first therapy appointment.)

One of the goals of therapy is to get our lizard brain to settle down.  A minor ache or twinge is not fight-or-flight worthy. I trained my brain to be that way, so I’d need to re-train it to recognize that a minor bodily sensation is not a danger.  And that the goal of CBT was to, in fact, re-train my brain.  And lo and behold, it was actually working!

Dr. Lindo’s explanation of this whole “lizard brain” concept actually made me feel a lot better about my health anxiety.  I always thought I was being so dumb when I couldn’t process rational explanations in the midst of an anxiety-filled moment.  But now, understanding that shutting off those rational explanations is literally how the brain is designed to work in panic-filled situations, it just somehow made me feel better.  And, my work was to continue training myself to have calmer reactions to bodily sensations, that way my brain didn’t trigger my fight or flight response.

Does your lizard brain kick in when you’re feeling anxious? 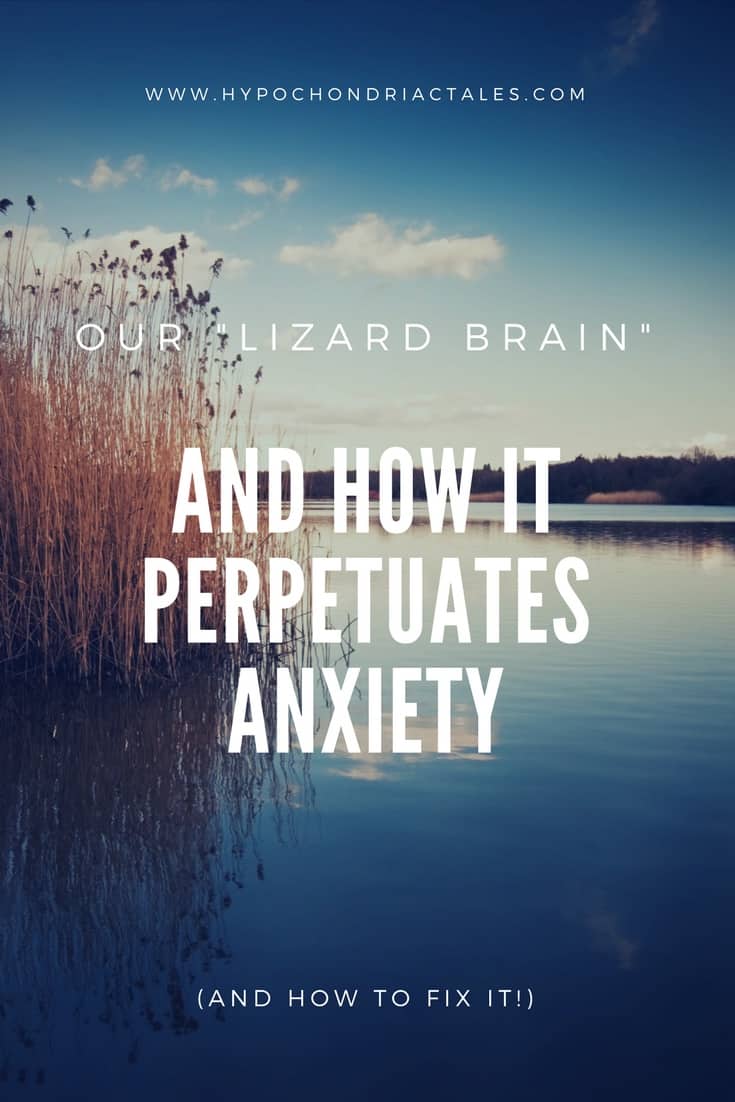