After my diagnosis of OCD and when I had began to identify my compulsions and talk about them in therapy, Dr. Lindo explained that most of my symptoms were related two forms of OCD: “Checking” and “Primarily Obsessional.”

She provided some descriptions:

The compulsions description for the Primarily Obsessional OCD jumped out at me like a lightning bolt.  For me, my mental ritual was reciting the alphabet.  Anytime I thought I was having an acute medical emergency, like a stroke or brain aneurysm, or whatever, I’d always say to myself, “Quick, recite your ABCs!”  And I’d start reciting the alphabet.  I figured that if I could recite the alphabet, then there probably wasn’t any major medical problem happening to my brain.  After learning this description of Pure O, I realized that reciting my ABCs, although I thought that it was relieving my anxiety, was actually causing more harm than good in the long term.

The other forms of OCD include (that I didn’t identify with any symptoms of):

What am I “Checking?”

Okay, so I understood the “Primarily Obsessional” part of my OCD.  But my therapist also mentioned that I was describing a lot of “checking” tendencies.  But I was having a hard time thinking of things I checked.  So, now having that awareness, I tried to closely pay attention to the things I did when I would feel an ache or twinge or other bodily sensation that would cause me anxiety.

And man-oh-man, I started to realize all the little things I checked during my day-to-day life.  Checking the toilet bowl after I went to the bathroom to make sure everything “looks normal.”  Checking my feet and ankles for signs of unusual swelling.  Checking my vision for floaters. Checking my heart rate on my Fitbit. Going to the online medical records system for my doctor and checking and re-checking my most recent bloodwork results.

I even discovered that I did a ton of “checking” in another thing that gave me anxiety … flying on airplanes.  I’ll talk in a future post about how my therapy for OCD actually helped with my fear of flying.  (Even though I flew frequently, flying was a huge stressor for me).  About a week before any flight, I’d check the weather forecasts, trying to predict if my flight would be turbulent.  The day of departure, I’d check TurbulenceForecasts, seeing how many pilots were reporting turbulence over the route I’d be flying.  And I checked these things over and over.  When I was on the plane, I was always looking out the window, checking for things like big, puffy clouds, so I could steel myself for the bumpiness that came with flying through clouds.

You get the idea. “Checking” had permeated my life, and it wasn’t until I had sought therapy that I even realized it.

You Check.  Now What?

Okay, so now what do I do with the knowledge that I am a “checker?”  Well, I stop checking.   Alas, that is easier said than done. But, now understanding the linkage between “checking” behaviors do nothing but exacerbate my anxieties, I figured I’d have to stop.

But, when I tried to stop, I started to rationalize my checking behavior and continued to do it.

I tried to explain to my therapist that certain parts of my “checking” tendencies are actually crucial to my health.  To everyone’s health really.  And, that everyone should check certain things. Of course we should monitor if there’s changes in our stool, and how else can we do that except checking the toilet bowl after we go to the bathroom?  And, how would I know if I might be getting melanoma if I didn’t check my body for new moles.

Then, I did something I’m ashamed of.  I expressed judgement at the folks that I think suffer from what I called the “easier” forms of OCD.

“I mean, those people that need to walk through doorways multiple times because the first time didn’t “feel right.”  Or those OCD sufferers that need to check that the door is locked.  I mean, what the fuck.  Exactly what BAD thing is going to happen to them if they don’t “feel right” after walking through a door?? If I don’t check my body for unusual symptoms, I might DIE!  Literally!  If someone leaves a door unlocked when they leave the house, okay, what’s the worst that might happen?  Someone might steal some of their shit from their home?  Whoop dee doo.  They won’t die!  Sometimes I wish I had one of those types of OCD because it sure seems easier to treat than Health Anxiety OCD!”

A Compromise and “Acceptance and Commitment”

Surprisingly, my therapist acquiesced that some “checking” behaviors are important for being aware of our health. Like making sure there aren’t unusual changes in our stool, or changes to moles on our bodies.

However, she rightly pointed out that I take my checking to the extremes.  I check things too frequently and too thoroughly, and I begin to obsess if there is even a minor, temporary change.

She suggested that I work out a compromise with myself. She said, perhaps consider checking yourself for moles only once every three to six months instead of every day.  Or, only check the toilet bowl once per month after going to the bathroom.

She also mentioned another Cognitive Behavioral Therapy (CBT) technique that I should try.  The technique is called “acceptance and commitment therapy” (ACT).

In a nutshell, she recommended that I start to practice “acceptance” of the things that are out of my control.  Like, the fact that I could get a dreadful disease.  Accept that fact, and commit to more positive behaviors anyway, instead of detrimental behaviors such as checking and reassurance seeking.   In other words, say to yourself, “Yep, maybe that headache is a brain tumor.  And if it is, then you’ll have to deal with it.  If the headaches continue, make an appointment with your doctor next week.  In the meantime, go about your daily life.”

I’ll talk more about ACT in a future post, but this was another technique that, applied over the course of 4-6 weeks, really started to help my health anxiety. 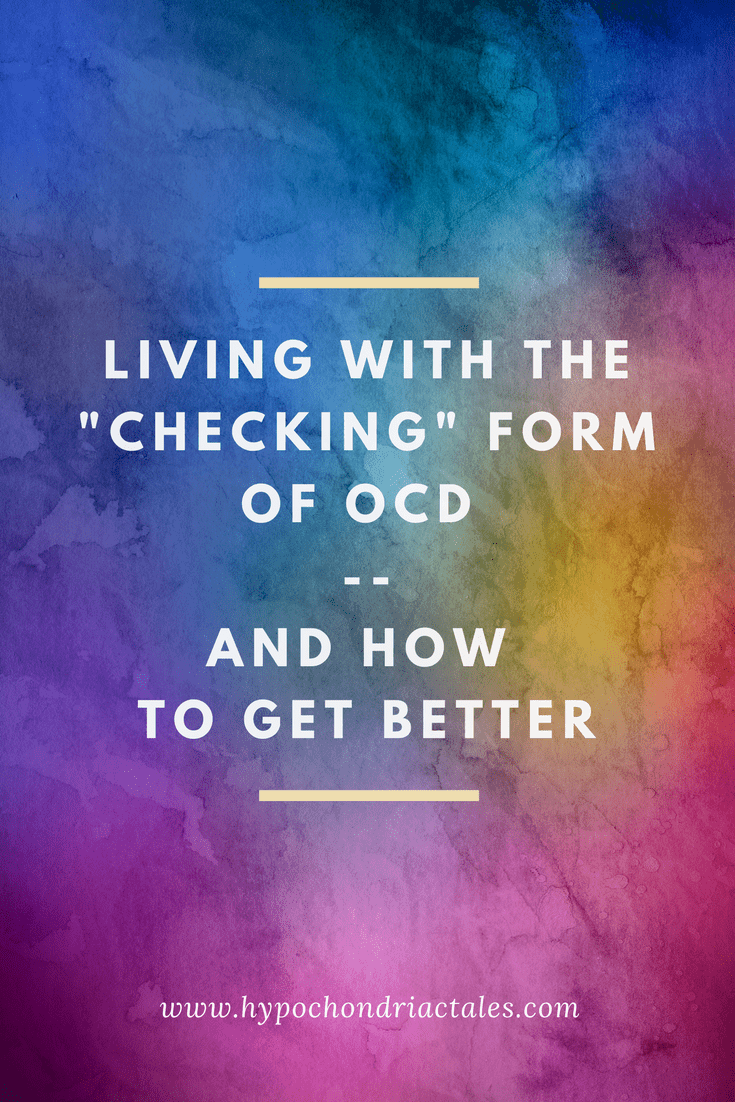 What is CBT and how does it Help Hypochondriacs?

The Question of Medication to Help Health Anxiety OCD