Following my initial diagnosis of OCD, I was pretty insistent with my therapist that I didn’t have any compulsions. Therefore, I was diagnosed with the “Primarily Obsessional” type of OCD (also called Pure-O). But, as I started to fill out my OCD Workbook, and as I began to mindfully record my actions when I felt a bodily sensation that caused me anxiety, I realized that I had a ton of compulsions. When I’d think of someone with OCD, I’d think of them repeating the same actions, over and over.  But, as I learned in therapy, compulsions don’t always have to be the same activity.

I also learned that compulsions don’t necessarily indicate a specific action.  Compulsions can also be an “avoidance” activity.

The pages of my OCD workbook had checkboxes that I could select of potential obsessions and compulsions.  From the workbook, here are the obsessions I identified:

Manageable daily tasks you can try for the next 30 days to kickstart your path to overcoming hypochondria & health anxiety.

Next, Identifying my Compulsions

For my compulsions, I checked the following boxes:

Granted, those checkboxes from the workbook are pretty general.  But, once I had a better idea of what OCD was, it was like the floodgates opened helping my identify my own, specific compulsions.

Here are some my specific compulsions I quickly identified after I started paying attention to them:

This next one is a bit gross and deals with bathroom-related things, so if you have a weak stomach, I’d skip this one:

I wouldn’t do each of these compulsions for every ache or twinge.  Sometimes it was just one or two.  Sometimes, it was several. The only two compulsions that I did fairly consistently were immediately touching or pushing on the spot causing me pain, regardless whether it was in my abdomen, arm, or forehead; and immediately stopping what I was doing to concentrate on the pain. Sometimes that pause was only for a few seconds. Like if I was in the middle of typing something, or cooking dinner, I would immediately stop what I was doing to “process” the pain sensation.

I also learned that compulsions included avoidance behaviors. As I went through my therapy journey, I was able to identify a lot of things that I avoided in the name of my OCD and health anxiety.

No, Googling my symptoms actually HELPS me.

In therapy, I learned that acting out the compulsions simply feed my anxiety and my obsessive thoughts.  In other words, although I thought that thinks like avoiding wearing shapewear, avoiding hikes, or Googling my symptoms made me “feel better,” it wasn’t.  It was actually making my anxieties worse.  So, in order to get control of my obsessive thoughts, I’d need to control my compulsions.

I spent a lot of time talking to my therapist one session about Googling symptoms.  I told her that a lot of times I find it helpful and soothing.  I recalled one time that I was hearing a strange rustling sound deep in my ear.  I was certain that a bug must have crawled in my ear in the middle of the night. I Google all sorts of related terms.  “Rustling noise in ear.” “What to do for bug in ear.”

And, my anxiety eased, because nothing seemed to indicate that this was any sort of life threatening, get-in-the-car-right-now-and-go-to-the-ER symptom.  With that knowledge, I was able to roll over and go back to sleep.

In another circumstance, I woke up one morning with an incredible pain in my right hip.  Like, almost severe enough that I was considering going to the ER (and remember, despite being a hypochondriac, I do not run to the doctor for every ailment).  However, the hip pain was only severe when I would first stand up.  As soon as I’d start walking, it would be fine.

So, I Googled something like, “severe right hip pain.”  And there were zero instances in which severe hip pain was something that would require immediate medical attention.  Sure, bone cancer was a result on there, but even for a hypochondriac like me, I was pretty sure that bone cancer symptoms didn’t just magically appear overnight.  So, I was able to calm myself about my hip pain, took some Advil, and by morning it was gone and it has never come back like that again.

Learning to Control my Compulsions

I have to admit, I was extremely skeptical that “controlling my compulsions” would do me any good. Since I never really noticed my compulsions prior to starting therapy, I didn’t think they played much of a role in my health anxiety and hypochondria.

But, I figured, I had started (and was paying for) therapy in order to help myself get better and to stop constantly worrying about my health. So, I was going to try everything that the doctor recommended and every little task in the accompanying workbook.

Wow, this is Really Helping!

I must say, I was shocked at the outcome. Controlling my compulsions helped me far more than I ever thought. It wasn’t overnight, but, it happened.

Within two months of actively controlling my compulsions, I estimated that my health anxiety OCD (hypochondria) had improved by probably close to 75%.  I really couldn’t believe it.  All this time, nearly a decade of worrying about my health, and THIS was all it took to get a dramatic improvement???

Don’t get me wrong. Despite my efforts to control my compulsions, an ache or twinge would still cause me an immediate moment of anxiety.  But, I was able to move on from it more quickly compared to before.  Previously, I would have obsessed probably all day about one quick little jab or ache that had only lasted an instant. Within about two months of controlling my compulsions, I realized that I would move on from that moment of anxiety much more quickly. So, yes, in that moment of the jab or ache, I would still get anxious.  But, I was no longer dwelling on it all day long. (And it got even better as I started to implement more CBT techniques)

Actions I Took to Improve my Health Anxiety and OCD

For those wondering, here is what “controlling my compulsions” involved:

And, a few things I didn’t do yet

At the time, I did not try to “force” myself to do any of the avoidance activities that I had identified. I did not make myself go on hikes despite being afraid of breaking a bone.  I did not force myself to sit on the floor despite being afraid that I’d get a hernia or pull my back getting up off the floor.  I didn’t start all of a suddenly going to the gym or wearing shape wear. I took things slow.  Only after several months, I slowly started to integrate avoidance activities into my daily life.  I started going to the gym again instead of avoiding it. I don’t allow myself to overthink getting outdoors and going on hikes.

And, like I mentioned, even just with these few compulsion controls in place, my health anxiety improved significantly. And, compulsion control (referred to more formally as “response prevention,”) was only one part of CBT. I was actually becoming excited to integrate other parts of therapy into my life, and was finally getting hopeful that I could, in fact, be cured.  Or, as they call it, have my OCD symptoms “managed.” 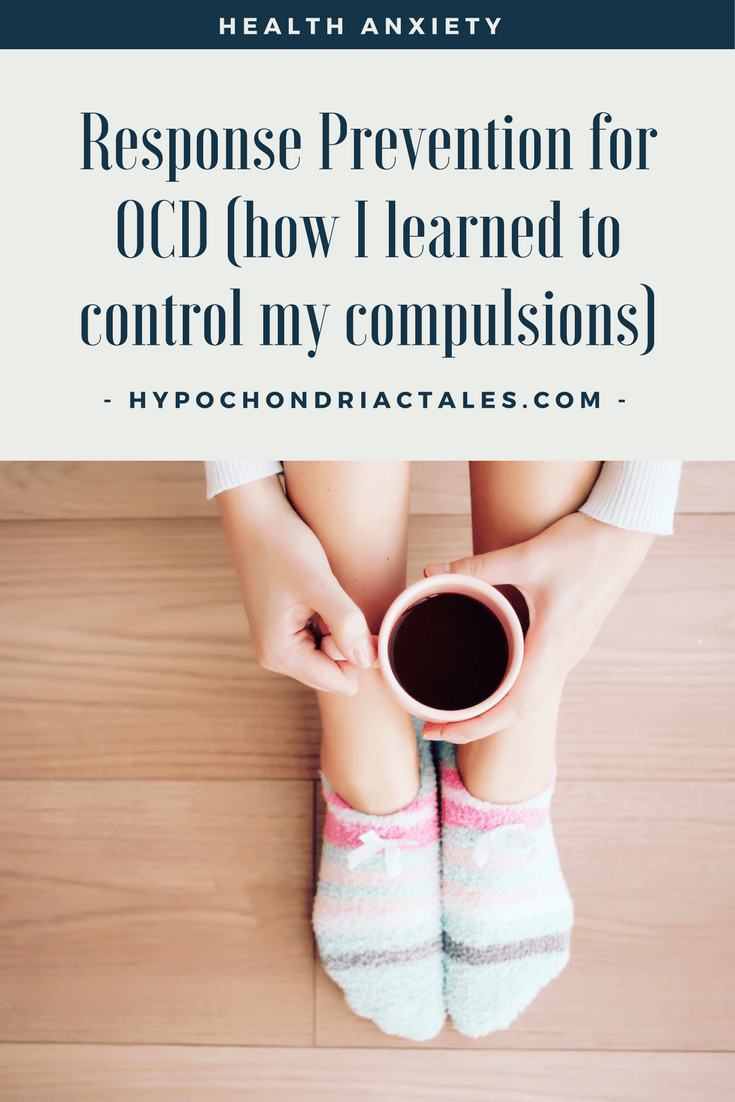 No, I don’t want to go Hiking, I might Break my Ankle (Or: Learning the Word “Catastrophizing”)

What is CBT and how does it Help Hypochondriacs?

[…] There’s actually a second part of CBT that I learned about from my therapist and in my OCD Workbook, and that is Response Prevention.  Response prevention is just another word for controlling my compulsions, which I’ve talked about at length in a prior post.  […]

Reply
The Setback in my Battle Against Health Anxiety OCD - Hypochondriac Tales January 9, 2018 - 10:29 am

[…] the beginning part of my therapy, I was pretty much focusing on controlling my compulsions.  I would estimate that I saw about a 70% improvement in my Health Anxiety OCD thoughts in the […]

I stumbled on your blog last night and it’s been very helpful. I can’t stop reading your stories because I hear myself in them. My thoughts aren’t as extreme as yours are but I feel less crazy knowing the thoughts aren’t actually mine and I’m not the only one. Thank you for sharing your story.

I’m currently laying in bed, reading your blog-I myself have been OBSESSING over petechiae and had convinced myself many moons ago it was AML.
That obsession has been followed by melanoma, and I am AVOIDING THE DOC-for a mole that just needs to be monitored. I’m currently seeing a therapist but we haven’t touched on OCD yet, although it makes a lot of sense
I love your blog, it’s comforting to know we all understand the lows that come with hypochondria.
This blog is like reading my mind-and I’ll have you know, as I am panicking in bed, your blog has brought me comfort